Approximately a thousand residents showed up Monday night to the Sunnyside Fire Relief Fundraiser to raise money for the employees and business owners whose lives were turned upside down after a massive fire destroyed a string of Queens Boulevard businesses last week.

The event, held at Sunnyside Community Services, raised nearly $40,000—on top of the $85,000 donated via the GoFundMe page that was launched Thursday night—in a show of force by the tight-knit neighborhood.

The tickets for the event—about 600 in all–were sold out online within 24 hours. Those who turned up without tickets, meanwhile, stood in the line outside of the 43-31 39th St. center, at times wrapping all the way down 39th Street to the Dollar Store on Queens Boulevard.

The business owners whose stores were incinerated were overwhelmed last night by the community’s support. Lena and Tony Tang, owners of the UPS Store

“Oh my god, I don’t know what to say,” said Tony Tang, the owner of the UPS store, one of the businesses on the block impacted by the fire. “We love the Sunnyside people, we love it here and it’s amazing. So many people here I know wanting to support us.”

Residents at the fundraiser rushed to hug Tang and his wife Lena, who together have owned a business on the affected Queens Boulevard block for over three decades.

Tang, who was in good spirits, said he is in Sunnyside to stay. He plans on opening a pop-up store soon, and is in talks with two landlords about finding a permanent space.

Bryan Chunton, the owner of Zen Yai, another affected businesses, said he was overwhelmed by the show of support. “When they say Sunnyside Strong, they really mean it,” he said.

Chunton is now looking for a  new space in Sunnyside to reopen. He also has a smaller restaurant in the East Village, and has been moving some of his Zen Yai staff to work at the location while getting in touch with other restaurant owners for employment opportunities for the rest of his team. 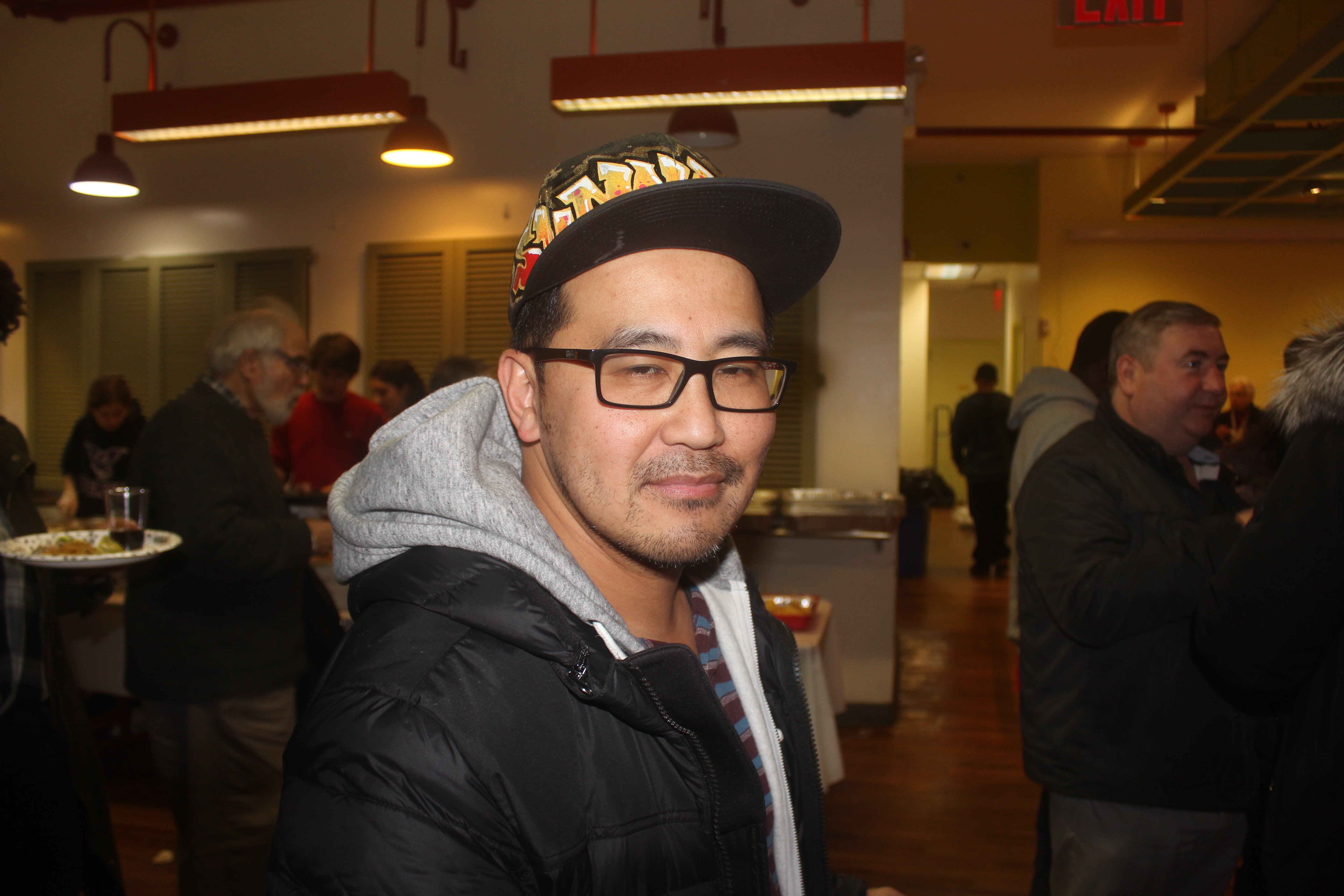 Sidetracks’ Bernard Reilly, the longtime owner of the neighborhood staple also destroyed in the fire, said he was “very appreciative of the community” during the fundraiser.

Other businesses affected by last week’s five-alarm fire include Romantic Depot, which opened in October, New York Style Eats, in business for about two decades and Better Line Hardware.

Jaime-Faye Bean, the executive director of Sunnyside Shines and lead organizer of the fundraising effort, said her office has been flooded with calls by residents asking how they can help. “A lot of people have been calling my landline and cellphone– and we have been inundated with e-mails. Many have reached out through social media, too.”

Assemblymember Cathy Nolan also said her office has heard from many residents who were looking for ways to help. The line outside of the fire relief fundraiser. (Photo: Queens Post)

Nearly 30 restaurants donated food and beverages for Monday night’s event, and attendees were offered a variety of food choices such as Turkish, Italian Irish, Mexican and Himalayan cuisine. There was live entertainment, holiday shops, arts & crafts for sale and even Santa.

Around 100 items were donated by businesses for a raffle, with some items, including several gift certificates to area restaurants, to be auctioned off this week on Sunnyside Shines’ website.

Melissa Orlando, president of the Sunnyside Chamber of Commerce, said the event came together so quickly because so many people wanted to pitch in and help. “I was at the scene on Thursday and people were already messaging each other asking what they should do. We really live a great place.”

Up on stage, Roque Rodriguez, of Suryaside Yoga on Skillman Avenue, said a few words. “In less than five days more than a thousand people have contributed [to the GoFundMe page]. Everyone in this room deserves a special thanks—from the people here, to the business owners and non-profit leaders. It is a testimony to all of us and how united we are.” At the Sunnyside Relief Fundraiser on Dec. 17. (Photo: Queens Post)

Too bad for the employees of these businesses. The owners just hit the retirement lotto. Take the money and run.

I don’t care its not my house. I will also continue to take up parking on alternate sides of the street parking even though I have a garage and a second off street spot. I don’t want nobody to park by my house. Too bad on the people.

The outpouring of support is great but the more pertinent question is where & how did the fire start? Who was covering the last shift at Sidetracks where the fire started? How are the funds raised going to be distributed exactly. People want answers. Let’s have some transparency for the community who stepped up to help. I am positive I am not the only one who wants answers here

I have not seen Sunnyside come together like this in a very long time. it’s a great GREAT thing to see.

I was the dj for the event. It was a beautiful night with so many nice, caring people in attendance

Why would anyone donate anything? All of these businesses had insurance and they should be paid in full for their losses. The 120K raised so far can’t pay for a single wall in those over priced properties. Hoping it wasn’t an IJ

I guess you forgot about all the employees of these businesses that are left out. I don’t think insurance covers their lack of a salary…

Insurance will only cover certain things. It does not cover lost wages for the employees, who are suffering the most from this.Owners and employees still need to pay rent. Plus it will take months for businesses to receive anything from the insurance companies. All the money they receive from the insurance companies will be used to rebuild the businesses it does not always take in account any money they make from the business.

It will benefit the workers, waitress, busboys who were left without a job before the holidays. Where is your Christmas spirit?

Insurance generally take a long time to pay out and many small business either don’t have insurance or let it lapse. Additionally, I believe the money raised is also for the employees of the businesses, who suddenly find themselves jobless. People donate because they care about others and aren’t terrible human beings.

The outpouring of support from our community is amazing! I was so happy to see Lena and Tony, and glad to hear they’ve got things in the works. The crowd was unbelievable! The evening came together as if it had been planned for months. Happy to help in any way possible. Fires sometimes take a while to investigate, so for the negative Nancy’s on here, be patient, and just let a story be a story.

What a great turnout and community spirit! That’s the Sunnyside I know.

My heart went out to every business afeected, especially the people running the hardware store. Those guys always had very good advice and were very helpful. I donated $40 to the gofundme page in honor of them and the workers in Sidetracks.

Those on line weren’t limited to those without tickets. I showed up at 6:15 with a ticket and the line was down to Dollar Tree. People were being admitted 10 at a time. I decided not to wait. The donation was the only important aspect to me.

Do we know yet why the fire happened?

Nope! Seems like it’s being swept under the rug like the last two fires. I noticed Jimmy Van Bramer snubbed the Romantic Depot in his instagram posts. This neighborhood and it’s representatives are so petty.