A new Citi Bike docking station has been installed at the corner of Northern Boulevard and 42nd Place (Photo: Queens Post)

The expansion will extend Citi Bike’s service area north of Ditmars Boulevard and east of Steinway Street. There will be 52 docking stations in the new coverage area that will cover 2.11 square miles.

Citi Bike first came to Astoria in 2017, after getting a foothold in the borough when it installed stations in Long Island City in 2015. The bike share company also has plans to install stations in Sunnyside and Woodside this spring.

The 52 new Astoria locations were chosen based on public input collected by the Department of Transportation (DOT) through virtual town halls, its online portal and community board meetings.

More stations will come online throughout the remainder of January and into February.

“With more and more New Yorkers choosing cycling as a sustainable and healthy form of transportation during the COVID-19 crisis, we are thrilled to ring in 2021 with this expansion of Citi Bike in Astoria and Steinway,” said NYC DOT Queens Borough Commissioner Nicole Garcia.

Several of the new docking stations will be in areas of Astoria that are far from public transportation options.

“Many of these new stations are in parts of the neighborhood further away from the subway, and our bikes combined with upcoming in-app transit information will make it even easier for riders to get to the N, W, R and M trains,” said Laura Fox, General Manager for Citi Bike.

The Astoria expansion is part of the DOT’s plan to build out the bike-sharing network across New York City that began in 2013 with Phase 1 of its installation process.

The DOT is currently in the midst of Phase 3 of the Citi Bike expansion that involves doubling the service area across the city to 70 square miles and tripling the number of bikes to 40,000.

The 52 new docking stations in Astoria are part of this phase.

The DOT is also planning to install Citi Bike stations in Sunnyside and Woodside this spring under Phase 3. The number of docking stations has yet to be determined.

A map of the incoming Citi Bike stations in Astoria is below. 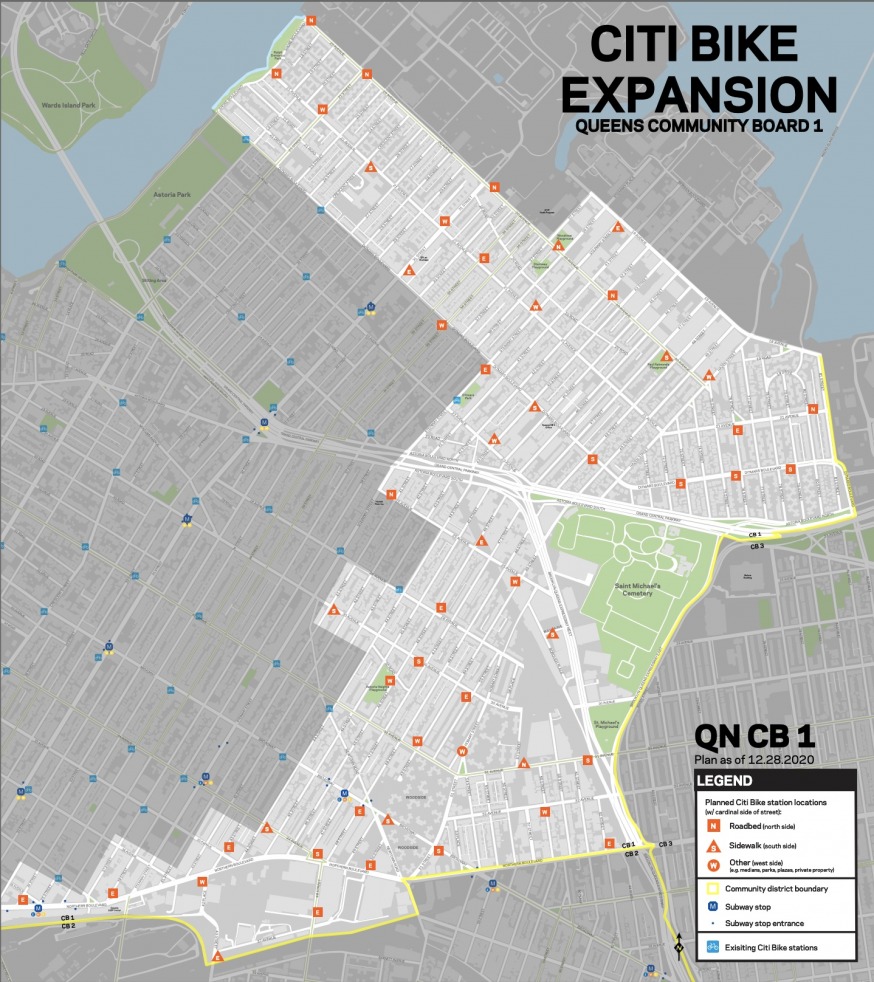 Because even though biking is the least popular form of transit in NYC, and obviously cars provide much more accessibility for the disabled than bikes do, the gentrifying entitled hipsters taking over our city hate disabled people that need cars to get around

I wonder if you really believe all this? Hope you don’t think your neighbors are actually such evil people.

Speaking for myself, I just want people to be safe and to have clean air. I’m deeply concerned about the climate crisis and want more healthy, sustainable transportation infrastructure. I resent being told that I “hate disabled people” – of course I don’t. Disabled and elderly pedestrians are in fact especially vulnerable on our dangerous streets and too many are killed every year by drivers. I care about them and I also care about all the people living in poverty in our city who don’t own cars. It’s time to share the streets.

Biking is exercise, it’s a physical activity, of course it is unfriendly to disabled people that cannot do that. Of course cars do physical stuff and provide that access to people that would not have it.

Stop blaming the poor and middle class for the climate. Stop saying that if disabled people can get somewhere without being crowded into COVID death traps they are taking too much having too much freedom and happiness for you to tolerate.

Go after the rich *FIRST*, make them sacrifice their polluting corporations and private jets *FIRST*. Help people in need get hybrids and electric cars, personal vehicles with personal freedom.

Why do nycha buildings have parking lots???

I’m not poor but I don’t have a car. Cars are kinda stupid and worrysome in NYC.

Listen to this entitled nonsense. I said it, there is not way to refute what I said – but the lie gets trotted out anyway that supposedly “poor people don’t drive in NYC.” – a lie told by wealthy entitled white hipsters.

Carver Houses Public Housing Project, NYC. If poor people don’t own cars, why are all these cars here?

I know this one well, because when my partner was dying of cancer, we had to try to park here to get him to his treatments.

Ravenswood Houses Public Housing Project, NYC. If poor people don’t own cars, why are all these cars here?

Woodside Houses Public Housing Project, NYC. If poor people don’t own cars, why are all these cars here?

QueensBridge Houses Public Housing Project, NYC. If poor people don’t own cars, why are all these cars here?

Astoria Houses Public Housing Project, NYC. If poor people don’t own cars, why are all these cars here?

Look at the toxic smoke of ignorance and hatred billowing out of this one! Any use of curbside space, including Citi Bike, comes at a $teep permit co$t to the u$er…except, of course, for free parking. And yet they see it fit to rant about entitlement while making straw man arguments about disabilities and gentrification? What utter nonsense!

Why are these going up in the winter? I hope a snow plow destroys the on street docks next snowstorm.

Because there are more unemployed people, students doing remote learning, people working from home, homeless, criminals, and mentally ill people walking the sidewalks in addition to delivery personnel and outside dining and people need to social distance and get to safety or run from harm if something were to happen. Bike station’s and lanes belong on the street. Be safe! Especially during this week and the inauguration. There are many angry trump supporters and racists around.

Shouldn’t it be Julie Running? She’s quite presumptuous, running around claiming she won before the election.

NO Bikes needed. Go ride in the park. These are such a DANGER to the streets because the people don’t obey the rules, traffic laws and have seen many times run thru red lights and up on side walk. I speak from experience of being knocked down on 44th street side walk, so the guy hits me and keeps going and I went to the Hospital. I Hate these bikes. DeBlasio Can’t leave office soon enough I blame Him for all this Crap.

Ever driven faster than the speed limit? Oh, yeah? What a sad hypocrite.

I hope you don’t order delivery food, you’re going to be really surprised when you learn they ride bicycles.

In 2019 over 38,000 people died in car crashes in America. About 4.4 million had injuries serious enough that they needed medical treatment.

Bikes are the danger?

It’s long past time to stop subsidizing car owners with handouts like free street parking and to start supporting in earnest safe, healthy, and environmentally sustainable transportation like walking, biking, and mass transit. This Citibike expansion is a small step but I’m glad to see it.

We can’t see or hear bikes especially if they…
Aren’t where they belong.
Going the wrong way.
Speeding demons.
Not visible at dusk.
Speed through the lights and go the wrong way on one way streets.

So, yeah they ARE the main problem!!!

Show me the data, please.

I agree, cars are the main problem so many people die. But bikes are “speeding demons” so this is bad…

Install them in Sunnyside already!

I will not believe this until I see a selfie of Jimmy Van Bramer at the bike station, where not these stations supposed to be put up last year?

thanks citibank for wasting and polluting what little sidewalk space we have left.

Not sure how they’re “polluting” but I agree that whenever possible these docks should be put in the street, not sidewalks. Enough with subsidizing car owners with free parking.

“Car Culture” is accessibility for the disabled. It’s especially sad that someone would want to stop “subsidizing” disabled people being free to travel independently without being shoved into trains and buses full of COVID.

“Car Culture” is accessibility for SOME people with disabilities. “Car culture” also means more dangerous streets for everyone, especially elderly and disabled pedestrians.

In any case, you have a good point and thats why they should increase parking restricts that are designated for people with disabilities. I’d absolutely support adding more to each block in the neighborhood. Let’s let people who really need to drive have parking and stop the handout of our valuable street space to people who don’t really need it.

Parking your Camaro for free on the street is “accessibility for the disabled?” You’re incredibly gullible 🤣

The vast majority of cars in Queens are not Camaros. You want to ban fancy muscle cars, I’m all for it.

The elderly, disabled, parents with families and caregivers need to be able to get around in a vehicle they can carry groceries in, they have adult responsibilities, they are not selfish one seat only bike riders with all the entitled ableism to exercise in everyone else’s way, plowing down pedestrians daring to cross with the light, because cyclists refuse to wait for a light.

No more public funding for sociopathic self riders that hate the disabled.

As in cluttering the space up.

There are already lots of sidewalks. Welcome to NYC.

We could use some of the space where you park your single car for free, every day, all day. That’s about 25 bike riders.

Oh, you don’t want to lose parking either? Ok…so your delivery driver should just run from house to house instead of biking? Imagine being THIS gullible!