Outdoor movie lovers will find a home in Sunnyside this summer.

On select Friday nights in June through September, Sunnysiders will be able to watch free family friendly flicks like The Muppets Take Manhattan; Spider Man: Into the Spider Verse; Coco; and West Side Story.

The screenings, hosted by the Sunnyside Shines Business Improvement District, will take place after dark at the Lou Lodati and Noonan Playgrounds.

Sunnyside Shines hopes that the events will give locals a fun activity to do over the summer and draw them out to the neighborhood’s parks.

Up to 200 residents are expected to attend each screening, the organization anticipates.

The first screening, on Friday, June 7, will be a night of shorts by Queens filmmakers pulled from the Queens World Film Festival and the Sunnyside Shorts Film Festival.

The following weeks, family classics will be played. The movies were chosen by residents through a poll on Sunnyside Shines’ Facebook page and email list.

The events were made possible through a New York City Council Parks Equity Initiative grant designated by Councilmember Jimmy Van Bramer. The organization says that now that the equipment is paid for, if all goes well, the outdoor movie series is likely to continue for summers to come.

The BID lasted screened movies at Noonan Playground in 2012, when it rented equipment from FunFlicks. There were equipment problems that year and the concept was later shelved. This year will be the first time the BID screens movies at Lou Lodati.

Screenings will start after sundown, with pre-movie activities starting at 7 p.m. 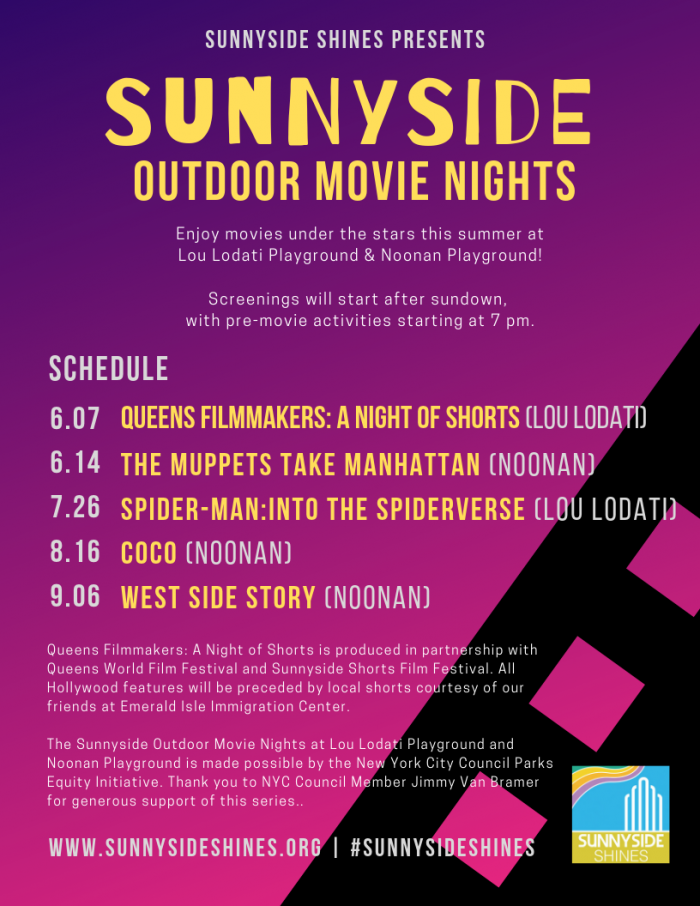 I get Lou Lodati because it has that big field, but Noonan Playground? Where you gonna host it? The small open curb where pigeons and homeless dudes chill at?

I grew up in Sunnyside – where are Lou Lodati and Noonan Playgrounds??

Well I intend on supporting these events – Thank you Jimmy Van Bramer.

Well I intend on supporting these events – Thank you Jimmy Van Bramer.

And how is it going to be heard when the train goes by?

What a great night of fun it will be!!..I hope our neighbors from the homeless shelters will bring their families!! Spanish subtitles would also be appreciated for our immigrant neighbors!!!

You know the person is being sarcastic, but is actually saying a great idea that’s generous and inclusive of our fellow members of humanity.

The effective business organization puts budget towards bringing neighbors and families together while the corrupt one throws a lavish ticketed gala to celebrate people tearing the community apart.

Isn’t it good to see a business group actually doing something good for the community?

All he said was yay for Sunnyside and got 15 thumbs down! Wow. A neighborhood of haters. Outdoor movies are great.

Get used to it. You can pretty much say, “I hope they catch the person who did this,” on an article about a shooting and get half a dozen downvotes. It’s an endless source of amusement for me. 😀