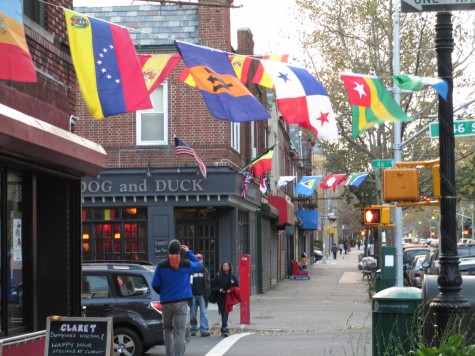 Two of Sunnyside’s leading business groups are hosting a large block party on Skillman Avenue next month that will bring bands, dancers and local restaurants together for the day.

The event, dubbed “The Skillman Avenue Fall Festival,” will take place on Saturday, September 26, from 4 pm to 8 pm. It will be held between 45th and 51st Streets, with Skillman Avenue between those streets closed off to traffic.

This will be the first street fair/festival on Skillman Avenue since the beginning of 2013, after they were scrapped following several complaints about the Manhattan-based organizer and vendors. Residents complained about noise and argued that Sunnyside business owners did not benefit from the events–since the vendors came from outside the community. Some scoffed at the items they sold, such as socks, hats & T-shirts, cheap jewelry, artwork, cell-phone covers and house plants.

This festival, organized by the Sunnyside Chamber of Commerce and the Skillman Project, will take on a distinctive Sunnyside/Woodside flavor.

Restaurants and bars such as Claret, Dog & Duck, Saffron Garden, Flynn’s, Quaint, Aubergine, Copper Kettle and the Globe will have tables and chairs on the street where people can dine and enjoy music and an array of performances.

Clubs and organizations such as Thalia Spanish Theater, McManus School of Irish Dance, Woodside Fencing and a local Taekwondo club will be providing demonstrations or performing. Several bands will be playing over the course of the afternoon.

Children will be able to get their face painted and be entertained by members of the Big Apple Circus who will be performing.

Members of the Sunnyside Chamber of Commerce are free to market their services at the event. So too are the stores located on Skillman Avenue.

Right now the traffic down 51street is terrible the honking of horns the pile up of cars at 4:00 is terrible due to the Fair. Where is the 108 Pct by 39 Avenue which is full of cars and dangerous to pedestrians? That’s the 108 Pct for you. Clueless on being proactive and only reactive.

What’s Flynns gonna do, give you fleas? Filthy little dive bar with no kitchen

This sounds like an amazing event. Too pleasant and civilized for the tube sock crowd. We should be thanking Dorothy for all her hard work. If that desperate I saw tube socks at the 99 cents store.

I often wonder if people living where fairs take place would enjoy it. SO easy when one lives far away, yes?

The neighborhood fair organized by residents was wonderful, clean, interesting, neighborhoody
Gave us a chance to connect.

I suggest people research why we claimed before they make ridiculos assumptions.

The most vocal opponent of the Street Fairs works at Welcome Home Real Estate. She was pissed that there was a generator running in front of the storefront.

There were many complaints about the Clearview street fairs, one of which was about the noise and smell of generators. Welcome Home Real Estate supports this event and will be participating with activities for children.

Will Keyfood and Rite Aid participate too?

There is no Rite Aid on Skillman Avenue. Key Food has not registered to participate.

This event is sponsored by the Department of Transportation as part of its Weekend Walks program. Vendors are not allowed. Sorry.

what happened to the op ed?

There is now a designated opinion section down the page. All opinions will go there after they have run as a feature article. Apologies for the confusion.

Hard to find, are you involved in the Scan?

OK, I only see “Latest News,” “Most Popular,” and “More Headlines.”

People will not be coming only to eat and stand about. Can make a vendor addition and make it pleasant.

See I am not the only one who will be looking for tube socks. Seriously ..

I need tube socks for when I fight Apollo Creed!

Sounds like fun … Could still have a few of those vendors who sell socks, etc.
…Will probably bring more people around. Not all will be coming to eat. or just stand about watching !! Just saying ..

But, will there be tube socks? That’s the important question.

Will there be a dunk tank so we can dunk de Blasio?

He’s too busy chasing topless women in Times Square. First time he wasn’t late for something.