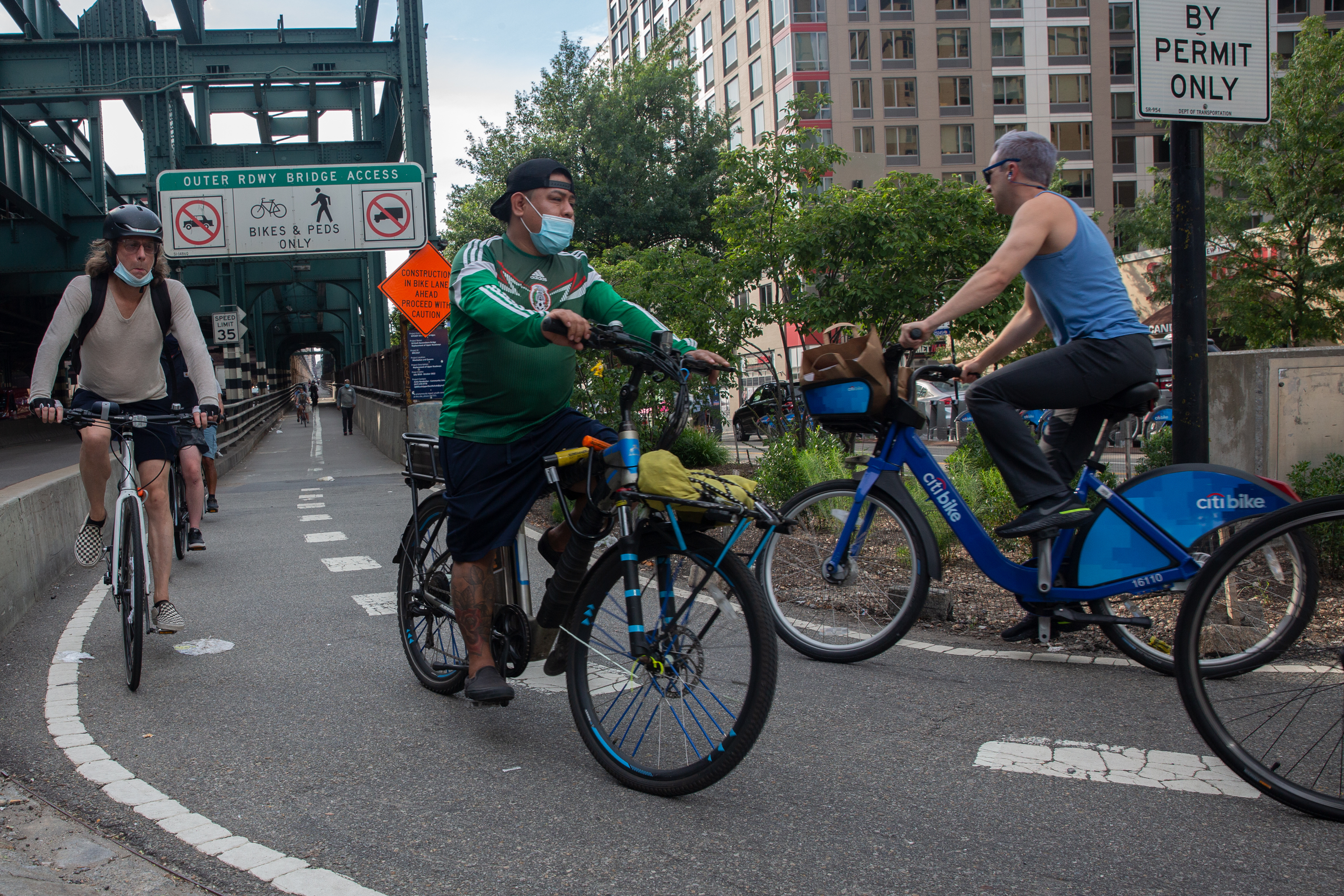 By Jose Martinez, THE CITY
This story was originally published on 8/5/20 by THE CITY

City Transportation Department data shows that the average number of bicycle trips across the Queensboro, Williamsburg, Manhattan and Brooklyn bridges are generally up over last year — with 20% hikes in June and July alone.

But the economic crisis that grew out of the global pandemic is causing the DOT to pump the brakes on efforts to ease congestion on the shared foot-and-bike paths on the Queensboro and Brooklyn bridges, according to a letter sent to cycling advocates and obtained by THE CITY.

The July letter from Eric Beaton, a deputy commissioner at the DOT, notes the current space for cyclists on the East River bridges is “not ideal” and describes the paths as “pinch points in the cycling network.”

But, he wrote, “alterations are too extensive to pursue immediately, given the city’s current fiscal crisis.”

Advocates and elected officials have long been pushing for more space for cyclists on the Queensboro Bridge’s shared path, as THE CITY reported last year.

“It’s packed,” said Laura Shepard a bike network organizer at Open Plans, an advocacy nonprofit. “You’ve got people walking and biking in both directions, a full range of people commuting, jogging, on pedal bikes, e-bikes and some of the smaller scooters.”

Beaton’s letter added that the department “agrees” that the Queensboro Bridge’s south outer roadway, now limited to motor vehicles, should be converted into a bike-only space, allowing the shared path on the north side of the bridge to be used only by pedestrians.

That would require, the letter said, adding “tall, secure fencing” to the south outer roadway to prevent cyclists or pedestrians from jumping or falling over the side, and to keep people from dropping anything into the East River. As part of ongoing work on the bridge’s upper roadways, which is expected to last until 2022, Beaton wrote that the DOT hopes to make the south outer roadway “safe and functional for cyclists and pedestrians in coordination with the larger bridge reconstruction.”

“We recognize this delay is disappointing and if the fiscal circumstances change and we are able to accelerate that timetable, we will certainly do so,” the letter reads.

Overall, May bike trips across the East River spans increased slightly over the previous year, following a 42% drop in April amid Gov. Andrew Cuomo’s stay-at-home order.

The boost in cycling comes as subway and bus trips, as well those in as yellow cab and for-hire vehicles, have plummeted.

Plans to potentially widen the shared foot-and-bike path on the Brooklyn Bridge had already run into “financial challenges” in the last couple of years, Beaton wrote, noting that bids to evaluate the iconic bridge cables as the first step in the project were “prohibitively high.”

“And now, with the city facing tremendous budget shortfalls, that project is even more challenging,” he wrote.

The Brooklyn Bridge’s congested shared promenade, a favorite with tourists in pre-pandemic days, was crossed by 60,181 cyclists in July, DOT records show. That marked a decline from the 66,625 trips in July 2019, but bridge users are still careful when traversing the narrow passage.

“It’s noticeable how many more normal bikes and electric bikes are on the path before the pandemic, then you have the pedestrians who walk next to each other,” said cyclist Ricardo Arias, 54, of Corona. “You have to be careful on the path.”

This is urgent. The city would be wise to prioritize funding to convert the south outer roadway as soon as possible. The pedestrian/bike space has been unsafe and congested for a long time now. Now with subway ridership down due to the pandemic, we need to invest in our cycling infrastructure. If we don’t, the city is going to be even more overwhelmed with cars – a disaster for road safety, air pollution, and climate change.

I like to bike the bridge with my cat on my front handlebar basket.

They need to introduce a speed limit for all bike lanes and ticket those that speed and try to out pass pedistrains and bicyclists. We all learned in school to stay in line and to keep your hands on the stair rail to avoid overcrowding and accidents. Dont be a fool, bike cool!

I totally agree. When I was going to work a few blocks from the bridge on the Manhattan side, daily I observed the bike traffic and activity going onto the bridge from my 7 train view. It is definately too crowded. Race bikers are scary. Although I recently purchased a bike and this would be a great way to make to work, when it work returns, it’s too dangerous.

Boo ho path is not large enuff. Its too crowded . Shall the taxpayers build a new bridge for you.

No, they are supposed to just remove cars from the other outer path and turn it into a pedestrian path.

The taxpayers are paying increased taxes for the wall. Why not a bike lane?

I’m sure if they were all in cars, you’d be complaining about all the traffic, Jenny.

Cars have traffic. Deal with it!!!
We have other important things right now. No, bikes dont matter

Biking is not a fun stress free activity. Riding over those bridges is incredibly stressful especially if you’re a jogger. I dont know why people insist on trying to make this city Bike friendly …it doesnt work plain and simple. You want it to work but chances are those people who advocate the hardest dont even have a bike

Disagree. Biking is very fun and much less stressful when the infrastructure is adequately protected from traffic like Skillman now is. That’s exactly why groups like TA, bike riders, and non-riders have been advocating for DECADES to improve it. It works, plain and simple.

yes I like to bike..please make everyone and everything else just go away and give me what I want…and I want it now…

Cities that support cycling and discourage motor vehicle transportation are healthier, safer, and help us mitigate the existential threat of climate change. It’s not productive to malign either “side” of this debate on how our public space is used. We should all consider the greater good.

Yes, advocacy involves asking for something to happen now. However, no one advocated to make everyone and everything else go away. If you think that, that misunderstanding is squarely on you. And don’t get me started on those who would actively spread conspiracy theories to perpetuate and empower you to voice your ignorance….

I agree. Bikes are cool they just dont belong in ny. It too big too populated. Cars trucks are definitely more necessary than bikes. Also bikes don’t belong on queens boulevard or any big busy street.