The brothers are back in business!

Four brothers who opened a Mexican diner in Sunnyside in 2004 reopened today after being shut down in August due to a gas leak.

The popular diner, aptly called The Brother’s Cafe, was shut down when a gas leak spread through the 39-49 43rd Ave. building they operate out of—and the city forced them to close.

The landlord was able to restore service for the residential tenants in the building but was unable to fix the problem on the ground floor where they are located.

Their business was thrown into chaos at the time—since they were still trying to recover from the pandemic.

“We are so relieved to reopen,” said Noe Herrera, 55, the eldest of the four brothers, who runs the diner with his brothers Mario, 48, Ciro, 43 and Rigo, 39. “We worried for a while that it would never happen.” 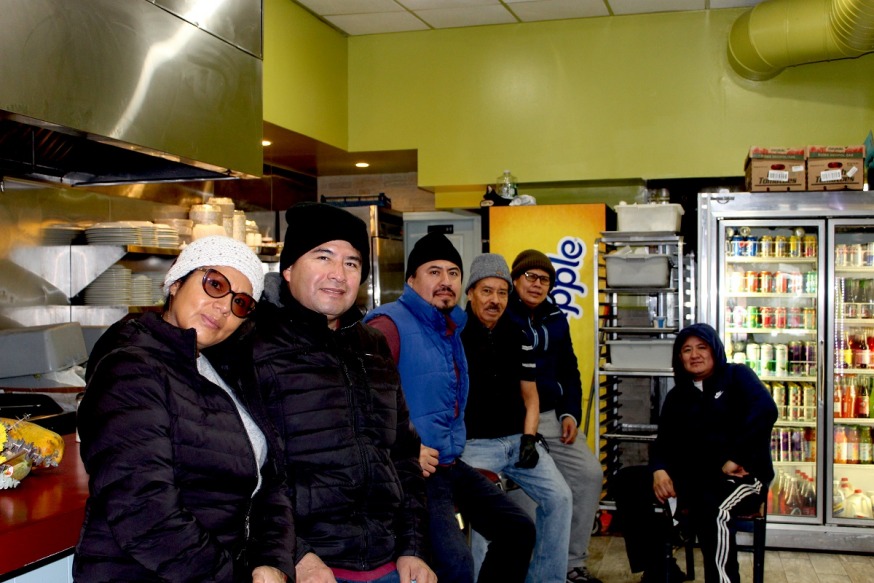 Noe said the diner will continue to offer its popular breakfast food as well as the Mexican dishes it is known for.

“We are keeping with our traditional breakfast as well as our tacos and burritos,” Noe said. “We may be adding a few things.”

The past two years has been an epic struggle for the brothers.

“We saw a 50 percent drop in sales at the beginning [of the pandemic] and when everything was coming back to normal, we had gas problems and had to close,” Noe said.  He said a main pipe had to be replaced and the city had to issue permits before they could reopen.

Noe said that he was forced to work elsewhere since the August shutdown. He was an Uber driver two days a week, while trying to get the business back up and running. He said his three brothers were doing construction jobs to get by.

The four brothers—all Mexican immigrants–have deep roots to Sunnyside, with all of them living in the neighborhood and their respective children going to the local public schools. For instance, Noe’s two children went to P.S. 150, which is located across the street from the diner.

The brothers also have two sisters who live in the area.

Noe was the first to call Sunnyside his home. He immigrated to the United States in 1989 and initially worked in a deli in Manhattan while living in Brooklyn. He moved to Sunnyside with his wife in 1994 and soon got a job at the Orient Cafe, which was a restaurant where Brother’s is located today.

“The owner, an Egyptian man, wanted to retire and asked me if my brothers and I wanted to take over the business,” Noe said. The brothers took up his offer, changed the name and put a Mexican twist on the menu.

Noe said Brother’s started to thrive in about 2006 and business was steady up until the pandemic struck.

He said that he and his brothers have received a lot of encouragement from residents since they closed.

“People would ask me and my family all the time, ‘When are you going to be reopening?’”

Noe said that he was suddenly notified by the city this week that they were permitted to reopen.

“The meters went in yesterday [Wednesday],” he said, noting that it was a very uncertain period.

“I wasn’t sure when we could reopen. I thought maybe it’s going to take another year, maybe another six months. I just didn’t know. However, we never gave up.”

I too am a resident of Sunnyside. I enjoy the Brothers Cafe souch. The food is always Fresh, and, very tasty. Despite, not being Mexican, I have become a frequent customer. I’m just thrilled they reopened… Welcome Back !!!

Great diner so glad they finally opened. Welcome back Brothers

Brother’s is the best place in Sunnyside, great food and family owned and operated. Welcome Back!

So happy they’re back! I was worried the pandemic caused them to close.

They should have taken the opportunity to renovate and clean the place a little . But I am happy their business has been restored.

Glad you folks are back open been trying to get a apartment next to you so i can eat the best food in NYC Aaron U.S Navy Retired
S

A great family diner run by very nice people. I wish them the best!

I live in this 40 unit apartment building. We were lead to belive that this was a ConEd problem out in the street. Not a gas leak within the building itself. Umm humm. And how much did the Department of Buildings fine and sanction the Landlord for misleading tenants about a dangerous condition ? Zero. Umm humm. Was it just going to be a “oops” moment if something catastrophic occurred ? Beyond disgraceful.

It’s funny how you cover the story now. Where were you when they needed you most?? Nowhere that’s why, it wasn’t a hipster spot and or a convivence for your readers to cover a story about a Hispanic owned business. SP, should stand up more and cover stories of business struggling because the gas system wasn’t fixed for over five months. How about also advocating for the skillman coffee shop?? Stand up for everyone and not just the bike lanes, those are the worst.

I had a gas leak after I ate there one time!

I was just there and that happened to me too! haha

Shouldn’t it be “The Brothers’ Cafe” plural since there are four of them?