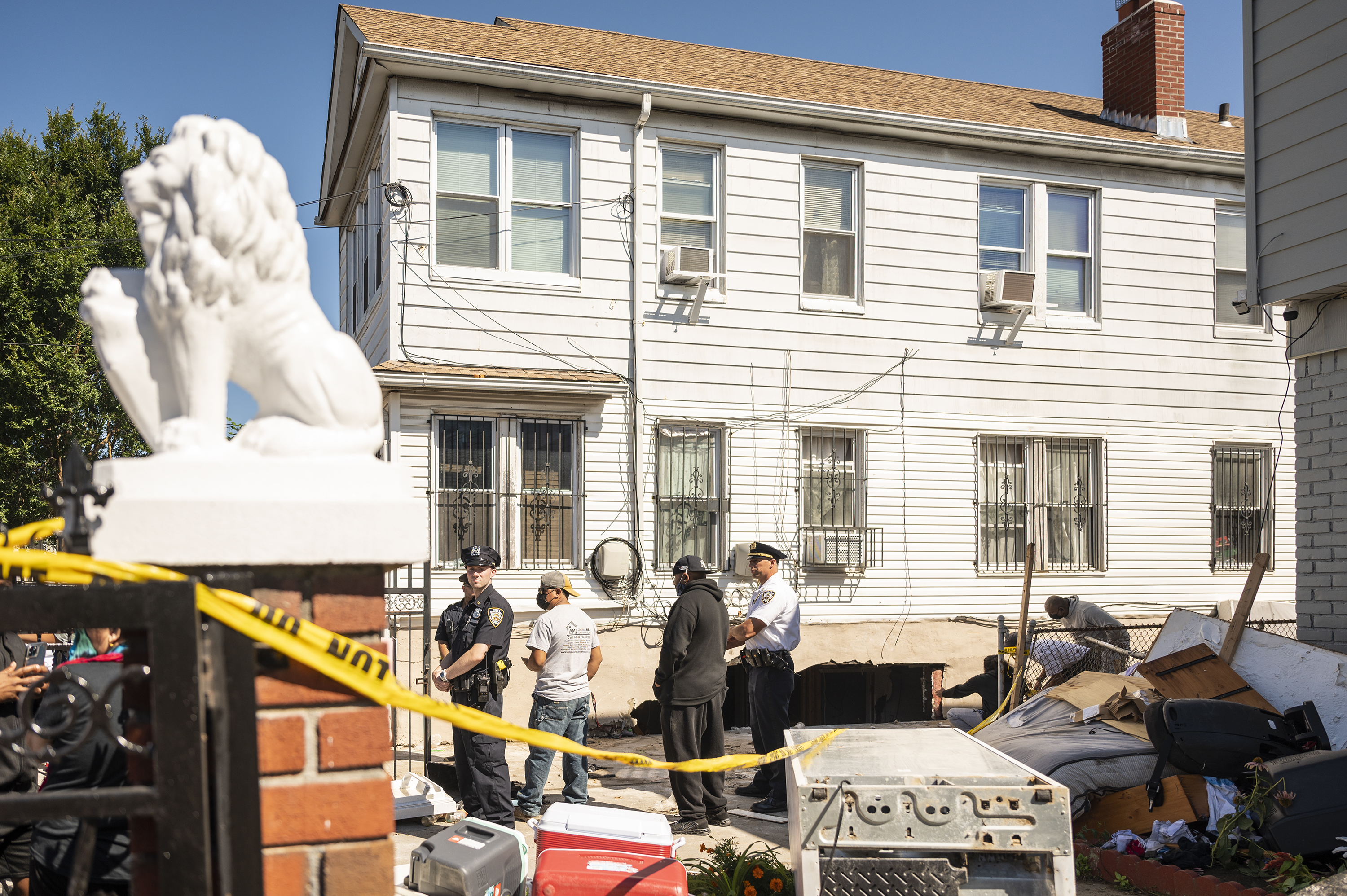 A stormwater risk map issued by the city in May showed serious possible flooding at homes where 10 people drowned in their basement apartments when record-breaking rainfall pummeled the city Wednesday night.

The interactive map, released in conjunction with Mayor Bill de Blasio’s stormwater resiliency plan and required by a 2018 City Council law, offers a granular look at the threat, with a foot or more of flooding predicted in some areas when combined with expected future sea level rise.

The plans showed awareness of vulnerable spots, as de Blasio Friday continued to describe the deluge brought by the remnants of Hurricane Ida as an unpredictable event — one he said New Yorkers should expect to recur.

“We are now dealing with something inconceivable,” the mayor said during his morning press briefing. “Once in a century events are happening regularly.”

The plan had laid out a decade-long timetable for new measures such as building new high-level storm sewers to better handle rain and working on a notification system for people in vulnerable areas.

As reported by the New York Post, an early-warning system to evacuate basement apartment dwellers wasn’t slated to launch until 2023.

The mayor vowed to accelerate action.

“We’re constantly racing against higher and higher standards and we’re going to have to do our best to meet them but sometimes the power of nature will surpass this,” he said.

De Blasio announced a task force to focus on stormwater and said to expect future travel advisories and mandatory evacuation orders ahead of forecasted storms like the one that slammed the city Wednesday.

He said City Hall would expedite a plan to notify people living in basement apartments about the possibility of flooding, and could even order mandatory evacuations. Some housing advocates estimate potential for more than 300,000 basement apartments in New York City, but the mayor on Friday said his office put the figure at about 50,000 apartments, housing close to 100,000 people.

“We know basement apartments create a whole set of particular challenges,” he said.

“It is our duty to move these New Yorkers out of harm’s way by offering them safer, regulated housing,” she added.

Early notification could have saved lives on Wednesday, when 11 of the 13 people killed in the storm died inside flooded basements. Most of their homes had been illegally converted into apartments, the Department of Buildings said Friday.

For those who died, at four homes in Queens and one in Brooklyn, all but one location appears on the city’s map as at risk of future flooding even in moderate rainstorms:

A 66-year-old man was found dead inside a basement apartment at 491 Ridgewood Ave. in Cypress Hills, Brooklyn. His address was flagged for potential risk for flooding, the map shows.

A 50-year-old man, a 48-year-old woman and their 2-year-old son were found dead inside their basement apartment inside 44-60 64th St. in Woodside, Queens. The city’s stormwater maps show flood risk for moderate rain for a few homes on that block, which is next to a wall of the Brooklyn-Queens Expressway.

Two women and one man were found dead inside a cellar-level apartment at 153-10 Peck Ave. in Flushing, Queens, near Kissena Park. The city’s map shows future risk for flooding even during moderate rainfall.

An 86-year-old woman was found dead inside a flooded basement at 55-35 84th St. in Elmhurst, Queens, which the map shows was partially at risk for flooding during moderate rainfall.

A 45-year-old woman and her 22-year-old son were killed as they became trapped inside their basement apartment at 90-11 183rd St. in Hollis, Queens, on a block with longstanding flooding issues, neighbors said. The map showed the block was susceptible to flooding during extreme rainfall.

A spokesman for the mayor said the city prepared as best it could, including sending out alerts across the city about what turned out to be a historic deluge.

The mayor reiterated on his weekly radio appearance that the city was working to change how it responds to extreme weather.

“The storm has shown us a ferocity and a speed that is just absolutely breathtaking,” he said in an interview with WNYC’s Brian Lehrer. “And it’s made very clear we’re going to have to change a lot of things we do.”

One the blocks where some victims died in Queens, neighbors said flooding has been a longstanding issue and called on the city to take action.

Samsul Chowdhury owns a home a few doors down from the basement apartment where the couple and their son died during the quick-moving storm. He rushed his own basement tenants up to his apartment when water started pouring in.

“There is a problem that the city needs to fix,” he said Thursday, while showing the damage inside his home.

Costa Constantinides, a former City Council member from Astoria who sponsored the stormwater plan and map law, told THE CITY Friday that all branches of government — and city residents — will have to commit to improving aging infrastructure.

“It’s not going to be popular, and it’s going to cost a lot of money, and we’re going to have to explain it really well,” he said.

“This infrastructure was built in the 1900s, and it was built when the city had millions fewer people,” he added. “An inch and a half, two inches of rain causes major problems. We know all these things, yet we’re not taking any action.”

This is the first I’m hearing about, much less seeing the stormwater risk map. I don’t live in a federal flood zone, and would never think so much water from the remnants of Ida would inundate my neighborhood. We’ve had far less water problems with past hurricanes, including Sandy.

Mayor-to-be Adams, you need to fix this problem. DeBlasio ignored it.