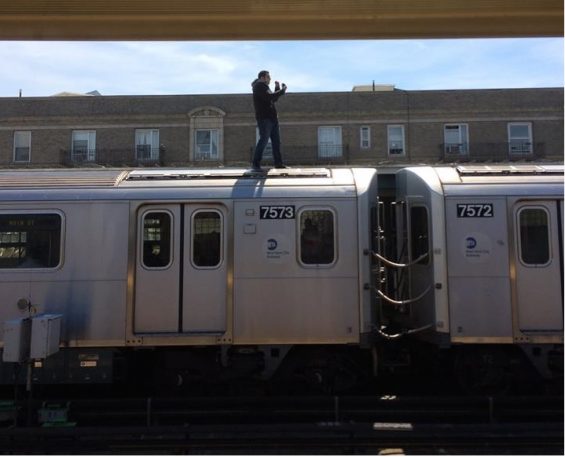 A subway surfer was riding on top of the 7-train through Sunnyside yesterday as stunned passengers looked on.

The incident took place at around 1:40 pm and was witnessed by Darron Cardosas and his husband Mark Jones Alan, who snapped the photo.

Cardosa said that they were waiting at the 40th Street station for a Manhattan-bound train when they looked across the tracks and saw the man on top of a Queens-bound 7 train. The surfer, Cardosa said, appeared to be filming himself and taking selfies.

“Everyone at the station was yelling at him to come down and trying to get the train to stop,” Cardosa said. “Everyone was in shock.”

The train continued on toward the 46th Street stop and that was the last they saw of him.

“Craziest thing we have ever seen,” Cardosa said.

The police had no information on the incident.

The mta should put wires over the top of the train, the size of the width of the train, every 30 ft of track , so this guy gets whipped right off the train roof. Hopefully gets electrocuted.

I agree I wish he fell but at night when im already home.

A boy who grew up in Sunnyside Gardens died about 40 years ago doing this. The train went into Queensborough Plaza, he was knocked off, fell to the street below and died. Kids don’t know enough to take care of themselves. Adults should.

I remember that. I think his name was Billy.

What pansies… How y’all wishing the cops on this dude for something he’s doing with his life?

And if your kids do this and die, your fault, not his

Man people and their group think are pathetic

Says the idiot who does this too

I could care less if this self absorbed dimwit gets mutilated. What I care about is some asshole shutting the train down because he fell, therefore delaying everybody’s commute for hours so he can jerk himself off. Get it now? Idjit.

If you are surprised/shocked by this then you must be new to New York. Let me guess from the South or Midwest? smh.

Actually, I have lived here for 25 years and yes, it is still surprising to see someone riding on top of the subway car. Why do you need to assume someone is new to New York to show emotion?

I hope he falls on the 3rd rail

Dangerous-YES.
Ill-advised-YES.
A true testament to the true nature of NYC at the turn of the century-YES.

Some of the most important messages are said with no words. Ladies and gentlemen, I present to you: ART.

You’re an idiot, and obviously not a born-and-raised New Yorker. Art, she says. Good god.

Is sad and stupid. You have a lot of young kids who would attempt to do this crap. With school soon to be out they will have more time to copy this idiot. Please tell me ny finest got this a hole.
Lock him up. Let him surf at Rikers.

Some people will do anything for attention:

That’s nice, but when is Murphy’s opening?

im waiting for the grand opening…..

I knew someone who used to do this all the time… until he was decapitated and died:( DONT DO IT!!!

Hahaha “until he was decapitated”, I call bs!

I know this kid, and I also know who she’s talking about. Nope not BS.

I know him too. He is easy to identify on account of him not having a head.

It is a sad and true old Brooklyn story :(.