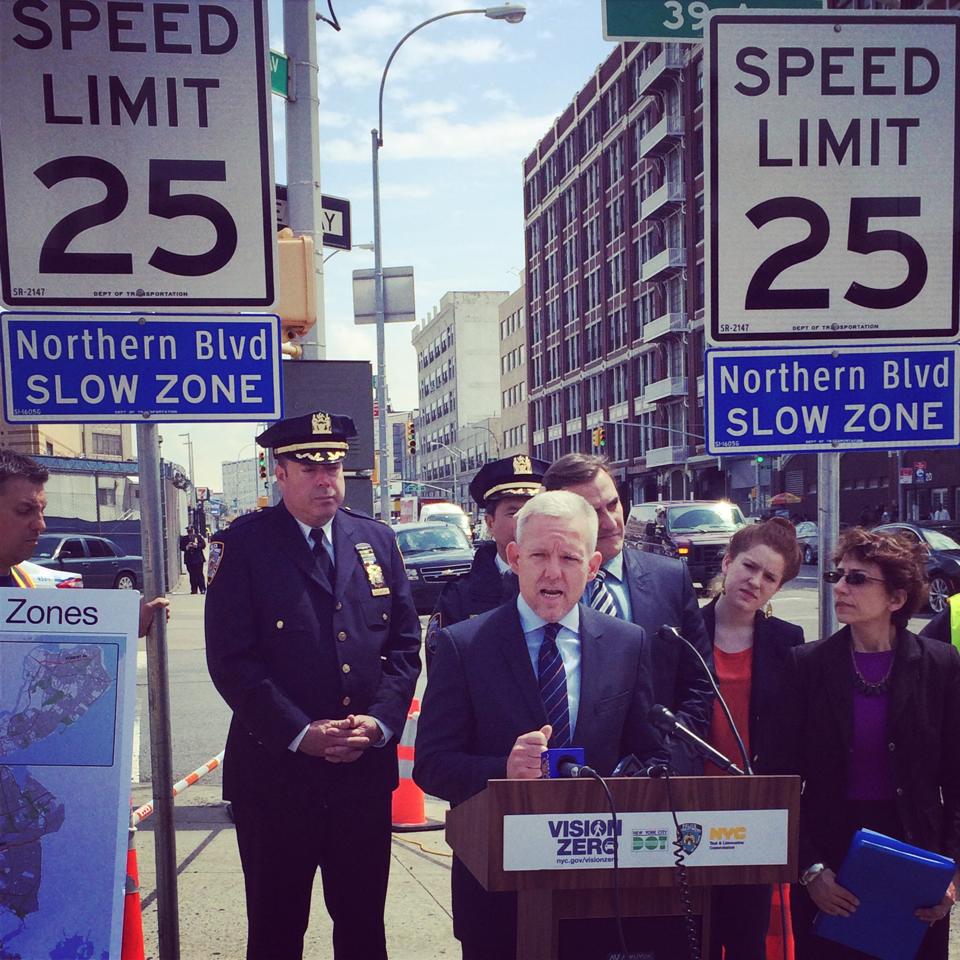 The city is lowering the speed limit on large sections of Northern and Queens Boulevards — as part of its Vision Zero program to reduce pedestrian fatalities.

This section of Northern Blvd has seen five pedestrian fatalities since 2008, according to city statistics.

Meanwhile, in July, 7.4 miles of Queens Blvd will be deemed a slow zone, where the speed limit from Jackson Ave to Hillside Ave will be lowered from 30 MPH to 25 MPH. There have been 23 fatalities on this section of Queens Blvd since 2008, according to officials.

In addition to introducing the slow zones, the city plans to change the timing of signals to on both roadways to discourage speeding. It will also call for greater police enforcement on selected streets.

“We have to do everything we can to reduce these unnecessary deaths,” said Councilman Jimmy Van Bramer. “This is an obligation of our government to end this and protect [pedestrians].”

Van Bramer went on to say that reducing the speed limit, even if is only by five miles per hour, can and will save lives of residents.

Meanwhile, State Senator Michael Gianaris noted that Albany is starting to play its part in trying to combat traffic deaths.

“Just yesterday in Albany we approved the addition of 120 new speed cameras in school zones around New York City,” he said.

The location of where these speed cameras will be placed will be the city’s decision. However, Gianaris said, the legislation requires them to be within a quarter mile of a school. Gianaris also said that he is still pushing for his legislation that would impose tougher penalties for those who drive on suspended licenses.

Northern and Queens Boulevards are two of 13 arterial roads that the city has selected to be part of the speed zone program this year.

“I am pleased to bring the Arterial Slow Zone program… where long crosswalks and high speeds have been an unnecessary reality for too many Queens residents,” DOT Commissioner Polly Trottenberg said in a statement.

This is absolutely ridiculous. All this will do is divert speeding traffic to our local streets on say, Skillman Ave., when Northern Blvd is technically designated as a highway. If the politicians want to lower speed limits to protect citizens in the area, lower them on the correct streets instead of a highway!

SC maybe there is no ray of sunshine……….and repaving the streets should be first priority

That is just nasty to drivers when there is no need for it!

South Side Johnny
I wish that too, I always thought this site needed a better commenting system to keep the idiots out of and vote them but not every site can be gothamist or reddit, right?

I know, the mongoose! I wish we could *star* comments!

RikkiTikkiTavi, always so negative. Like the opposite of a ray of sunshine, you always bring gloom to our discussion.

gOgles- The police have better things to do? What do you think their day consists of? Investigating crime? How about paying attention to the concerns of the neighborhood? I’d like to see enforcement of the traffic laws already on the books. So many people make U-turns where and whenever they want to. We need more things to calm traffic and discourage non-local traffic from using our neighborhood as their own personal shortcut. Queens Blvd especially is packed with pedestrians, unlike Northern.

the plazas should be converted into bookstores.

They want poor people out of cars and onto the subways. That way rich folks, who don’t have to abide by any rules anyway, can go as quickly as they want to the lunches and dinner where they pay our public officials to make the city nice for them and hide all those poor folks with dirty cars in underground where we don’t have to see them.

“Old people and mothers with baby carriages cross against the light.” Yeah right! I see young people do it too. Next time, double check your facts.

Dropping the speed limit 5 mph will do nothing to stop people from getting run over and killed.

Where is the study that shows how many of these fatalities were crossing against the light?

Cops have better things to do than pull people over for going 30 mph in a 25 zone.

When this doesnt reduce it to zero fatalities will we then go to 20mph?

On my way to work I see tons of teens crossing against the light when getting off public buses. Why do they do this? Well, they have been conditioned to from riding the yellow bus for X amount of years, where all traffic is supposed to stop.

If you really want to solve the problem….stop giving licenses to every mook that shows up to take the test, @ least 30% of people driving should not be behind the wheel of a bicycle, let alone a car.

Let’s not do anything about peds jumping in front of cars but let’s crawl the speed and frustrate more drivers, there is no difference between 25 or 30, we know nobody will be going with 25 or even 30.
Who are they kidding exactly?

They should make the limit 40 and enforce is strictly, if you got over 40 you get a ticket, simple as that, not this “limit is 25 but it’s OK if you go with 55 and we don’t catch you” nonsense.

The other day someone I know got a ticket for going little faster than 10 mph over speed limit on QB where there were NO crossings and both sides of the middle “express” roadway is guarded with rails, because it is “school zone”.
The only reason to reduce the speed limit is to be able to easily ticket drivers and generate revenue, it has nothing to do with safety of peds. I mentioned that before, build overpasses for peds and someone said it was too expensive to maintain.. funny.

I agree with anonymous. Enforce the laws against drivers and pedestrians. Most people a careful drivers and cross at the lights, but unfortunately others don’t. That’s our society. Old people and mothers with baby carriages cross against the light.

30 is perfectly reasonable for those roads. Now even reasonable drivers can get tickets which is I suspect the real reason for this.

This city should do with cars what China does with its female babies.

OK now that people will be forced not to drive on northern and queens blvd. for long distances, raise the speed limit on the L.i.e and the gcp. ✌

Great, but meaningless if not enforced.

Make that 24 fatalities on Queens Blvd. since 2008: http://www.nydailynews.com/new-york/nyc-crime/court-officer-kills-woman-queens-boulevard-death-article-1.1778823

Pedestrians shouldn’t cross against the light, drivers should slow down and take care, and police should enforce the law.