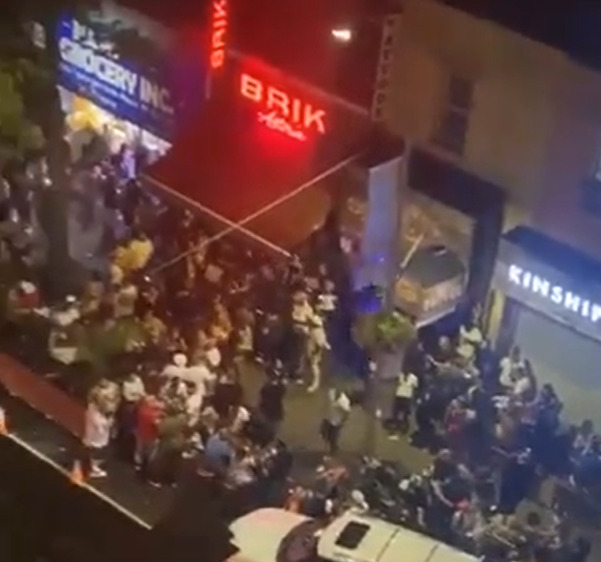 An Astoria bar and lounge has been booted from the city’s curbside dining program after crowds of customers swarmed the street out front with little to no concern for social distancing rules.

The city has suspended Brik Astoria, located at 32-16 Steinway St., from its outdoor dining program for seven days after dozens of videos and complaints surfaced over the weekend showing a clear lack of social distancing among patrons.

The lounge cannot set up tables and chairs in curbside street parking areas for one week and must submit a social distancing plan to the city to resume operations.

Brik Astoria is the only establishment that the city has suspended from the program thus far, according to City Hall.

Videos from this weekend show massive crowds of people — many without face masks — dancing and singing in the middle of Steinway Street. One video shows two people climbing up a moving ice cream truck.

Mayor Bill de Blasio called the crowding “unacceptable” on Saturday afternoon and warned that the coronavirus pandemic is not over.

“New Yorkers have made too many sacrifices to fight COVID-19,” he Tweeted. “We can’t let up now.”

By the following evening, de Blasio had taken a stronger stance, Tweeting “Party’s over.”

“Dedicated sheriff patrols will be on Steinway until further notice,” he wrote. “They’ll enforce closing times, issue summonses and work with the NYPD to keep the roadways clear.”

Steinway will be closed by tomorrow 😩😩 pic.twitter.com/izogF8nAvc

He issued a strongly-worded statement Saturday, condemning the bars and residents responsible and city agencies for a lack of enforcement.

“For the last week, we have seen a select few bars think they can flaunt every rule in the book while the City agencies tasked with enforcing them sit idly by,” Constantinides said.

“Our streets have descended into pure mayhem, the threat of COVID-19 spreading is dangerously high, and Astoria residents are rightfully furious at the relentless noise that goes into the early hours of the morning.”

He said Astoria has descended into “complete chaos” and that a few bars have turned the neighborhood into “one giant resort bar.”

They got stienway all the way litt son what 😂😂😂 #astoria pic.twitter.com/i21qM9wiIx

Constantinides alerted the mayor’s office, the governor’s office and the State Liquor Authority (SLA) as well, he said.

“Every business that flouts the rules has to be shut down — period.”

On Friday, Governor Andrew Cuomo enacted a ‘Three Strikes and You’re Closed’ initiative in which any establishment that receives three violations will be closed down.

This morning, he responded to the chaotic scene along Steinway Street on Twitter, but didn’t say whether the state or SLA would reprimand Brik Astoria or other bars along the strip.

“This is not NY Tough and it sure isn’t NY Smart,” he wrote.

He told the young people partying to “don’t be stupid” at a press briefing this morning and warned that the state could roll back its reopening plan by closing bars and restaurants if the lack of social distancing continues at such establishments.

Cuomo said the local governments must enforce the requirements.

De Blasio also said last week that the cases of COVID-19 are rising among New Yorkers in their 20s — and bar hopping could be a cause.

Council Member Constantinides, who was previously hospitalized for COVID-19 himself, called out young adults partying through the night on the Astoria block.

“To those out there partying until sunrise, stop,” he said. “COVID-19 is still a serious threat, and just because you’re young doesn’t mean you’re invincible.”

He warned that they could pass the deadly virus to others who are more vulnerable.

The Council Member also added that Astoria residents deserve to walk down clean streets safely and go to bed without it sounding like a carnival outside.

“I am sorry that has been taken away from them this week, but we are working to ensure they are afforded that basic right.”

WTF is wrong with these people?

This is so ghetto, it’s unbelievable. Where do these people live, how far do they travel to join this horrible scene? Manhattan is dead empty at night, why don’t they just go and do it there, no residential buildings, all commercial, they can yell, piss, pass out, puke, whatever they have to do, why in Astoria?
The footage shows you what NY is becoming and the generation who will elect our next politicians. Brainless crowd who does this cannot be trusted with our future, hopefully with this much drinking and smoking they won’t be able to have kids and pass on their moron-a-virus.

This has been going on for weeks if not months! The only reason our local leaders are getting involved now is to save face after the younger liberal white residents in the area could not sleep, did not enjoy the rap music and started posting it on Social media. Many longtime residents have been complaining about the increase in noise, traffic, dirt, bars and restaurants (who typically open and profit off of alcohol sales) etc, for years but we were told we were old, afraid of newcomers, and even labeled us racists. Our local leaders just sat back and let the streets turn into chaos. So glad I moved.

Then you don’t have any experience with this, just speculation. Please stay out of it.

I moved but never sold my home. I rent it out and still have family and friends in Astoria. Many can’t wait wait to move out.

and you don’t know what it’s like. So you’re just guessing. Please stay out of it.

Where did you move to?

But protests were completely fine…

Yes the protest were fine. Masks and distance help slow the spread. Protect those around us and save our hospitals from being overwhelmed.

Not just having a party.

The fact that you have absolutely no idea what the final protests are about is bigly sad!

Oh yeah right
The looters were protesting social injustice
Got it

I didn’t guess as to the looters intentions. The “all protestors are exactly the same as looters!” is a really hot take though.